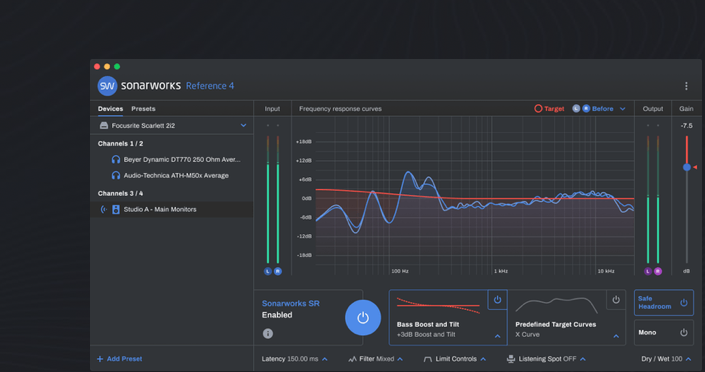 Once you start mixing with Sonarworks, you don’t want to mix without it.

“flatten the response of your monitor speakers and headphones.”

This is an excerpt from a case study from https://www.sonarworks.com/education written by Craig Anderton, Author and Educator at CraigAnderton.org

It sounds too good to be true – flatten the response of your monitor speakers and headphones.

No matter how good our software is, or our musical chops, ultimately we have to mix (and listen through) speakers or headphones. They are the weakest link in our audio chain, because speakers form a partnership with your room’s acoustics. So even if your speakers were perfect—which they’re not—the room will make them imperfect.

We need a flat frequency response for mixing and mastering to minimize timbral differences when your mixes end up in a consumer playback system. If you mix with a flat response, then everything will sound a little bit wrong on systems that don’t have a flat response. But if you mix in a room that, for example, emphasizes the bass, then you’ll mix the bass way lower than you should—and this doesn’t even take into account frequency response issues within the speakers themselves.

Or at least, it used to be…

I’d known of Sonarworks for a while, but I’d used room tuning software before, with varying degrees of success. JBL’s MSC 1 and IK’s ARC 2 definitely made a difference, and they helped, but any room tuning system always had a bit of a band-aid feel. I figured one band-aid is probably the same as any other band-aid.

However, Sonarworks is also about headphone tuning, not just room tuning. As someone who often needs to mix on headphones while traveling, that piqued my interest. At a recent Summer NAMM, I had a chance to hear the headphone system in action. It was impressive, to say the least, although I still was skeptical. I wanted to test it in my studio environment.

Sonarworks has measured a ton of headphones, and produced compensating curves. It’s a simple idea, but it works. If your headphones boost the bass, have a deficient midrange, and excessive brightness, you call up your headphone’s profile to cut the bass, fix the midrange, and tame the excessive brightness with a complementary response curve. (Note that these curves are averages, and headphones can vary quite a bit; also, not all headphones in the world have profiles. However, Sonarworks has a service that does custom headphone profiles for $149, and also sells headphones that have been profiled.) 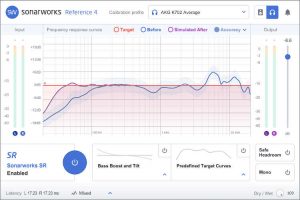 Figure 1: Sonarworks provides a compensation EQ curve that’s equal and opposite to the headphone’s characteristic curve (shown in blue). 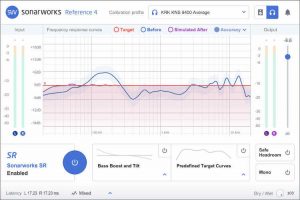 I’ll get into how the process works later, but let’s start with the conclusions. I have quite a few headphones with Sonarworks profiles, so I figured the toughest test would be to apply the curves to all of them, and see if they sounded the same.

Order your copy of sonarworks at https://vibetoolsng.com/?s=sonarworks&post_type=product&product_cat=0